In this section you will find information about Belarus. Professional journalists from the independent non-state publication officelife.media (location - Minsk) tell about what is really happening in Belarus. No political accents or ideological attitudes. Only the most important facts so that you understand the essence of what is happening in this corner of Europe.
Belarus news in English 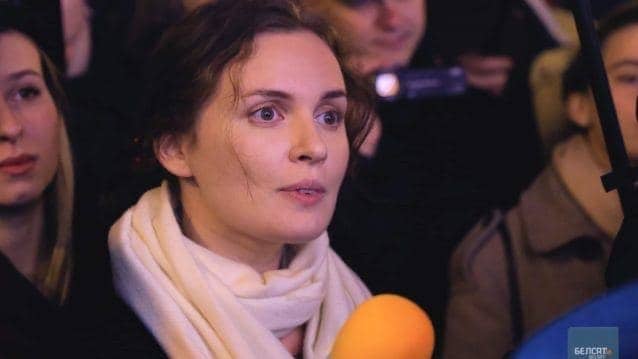 The first criminal case was initiated against a Belarusian journalist; new EU sanctions against the official Minsk were supported by seven more countries. Belarus, November 20, 2020

News
A journalist became a defendant in a criminal riot case for doing her job. Seven countries, including Ukraine, have joined the EU sanctions against Minsk. BelNPP will have to sell electricity to Russia to become profitable. The Polish Getin Holding is planning to sell the Idea Bank to the Belarusian MTBank.

Yekaterina Andreeva was charged under a criminal article for organizing and preparing actions that grossly violate public order. She will be remanded in custody for 2 months, until January 20, 2021. Andreeva does not admit her guilt and completely refuses to testify.

This morning, a search was carried out at the place of residence of Andreeva and her relatives. Nothing was confiscated. Devices and means of committing a crime, objects and documents related to the criminal case were not found.

Yekaterina Andreeva is now serving seven days of administrative arrest. The journalist was detained on Sunday, November 15, after the dispersal of protest action in the “Courtyard of Change.” According to law enforcement officers, she took part in an unauthorized rally, although from 12.00 to 5.30 PM she was in an apartment on the 14th floor of a house next to the “Courtyard of Change” from where she was broadcasting the dispersal of the protesters. This was confirmed in court by a witness, the owner of the apartment.

Andreeva said in court that she was detained by about 10 riot policemen who ran into the apartment after breaking down the door. However, the court found her guilty under administrative articles on participation in an unauthorized mass event and disobeying the demands of police officers. She pleaded not guilty and accused the police officers who drew up the protocol of perjury.

In the police department where the journalist was taken, she became ill and was taken by ambulance to the hospital. Nothing serious was diagnosed, however, she was prescribed a complete bed rest and a mandatory visit to a neurologist the next day. But on the morning of November 16, she was taken to the police station, and then to the detention center.

Ekaterina Andreeva is a journalist for the Belsat TV channel, which covers events in Belarus but is based in Poland, thus being a foreign media outlet. The Ministry of Foreign Affairs canceled all accreditations previously issued to foreign journalists in Belarus on October 2. Nevertheless, Belsat journalists continued to work at protest actions without accreditation.

According to the Belarusian Association of Journalists, 363 journalists have been detained in the country since the protests began on August 9. Twenty journalists are now behind bars.

The head of EU diplomacy, Josep Borrell said today that seven EU partner countries have joined the EU sanctions against the official Minsk.

In particular, the EU’s restrictive measures for the Belarusian authorities were supported by candidates for EU membership North Macedonia, Montenegro and Albania. In addition to them, the countries of the European Economic Area Iceland, Liechtenstein and Norway, as well as Ukraine, joined the decision of the EU Council on the third package of sanctions against Belarus.

These states expressed solidarity with the position of the EU, which condemned “election fraud and violation of human rights” in Belarus.

The European Union declared yesterday that personal sanctions against Belarusian officials and security officials will be expanded with economic sanctions, which will apply to companies and businessmen “financing President Alexander Lukashenko.”

BelNPP will be recouped only if it enters the Russian market

The most likely scenario for the recoupment of the BelNPP is to start supplying electricity from Belarus to Russia, says analyst Viktor Balyberdin from SCM Market Predictor.

However, the mere unification of the energy system of Belarus with the energy market of Russia will allow the Belarusian side to independently sell electricity on the market a day ahead in the first price zone but will not help to recoup the BelNPP.

The cost of electricity from the station is approximately €50 per 1 MWh, which is almost four times higher than prices on the Russian market. The pressure on the Russian market of new volumes from Belarus will reduce prices, which may fall by no more than 4% to the prices of 2020, Balyberdin predicts.

The most realistic scenario for the recoupment of the BelNPP is its entry into the Russian power market. With this option, Belarusian power plants will be able to participate in the competitive selection of capacity. In addition, Belarus will be able to apply with a request to provide BelNPP with the same addition to price that new NPPs in Russia have. This will mean that not only Belarusian but also Russian consumers will pay for the BelNPP.

The owners of MTBank plan to buy out Idea Bank, which is now owned by the Polish Getin Holding.

The parties have already signed an agreement of intent to sell 99.999% of Idea Bank shares to MTBank or related parties. The deal may amount to 50 million Belarusian rubles ($19.6 million).

Completion of the sale and purchase procedure will be subject to obtaining the necessary regulatory approvals. The parties want to close the deal by January 4, 2021.

Getin Holding, which is controlled by Leszek Czarnecki, a citizen of Poland and Malta, officially announced its intention to sell the Belarusian Idea Bank in early July. This happened due to the difficulties of the businessman, who fell out of the list of 100 wealthy people in Poland according to Wprost this year.

MTBank was founded in 1994. Now it is controlled by Alexey Oleksin, who also owns a tobacco factory, a fuel trading operator, a development company, an IT company and other businesses.

Belarus news digest
Journalists
Repressions
Protests in Belarus
Idea Bank
Nuclear Power Plant
Cannot find 'modal' template with page ''
In this section you will find information about Belarus. Professional journalists from the independent non-state publication officelife.media (location - Minsk) tell about what is really happening in Belarus. No political accents or ideological attitudes. Only the most important facts so that you understand the essence of what is happening in this corner of Europe.
Ru
или
Поставить напоминание